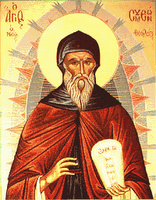 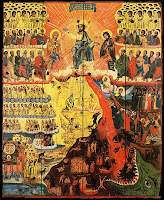 How will the resurrected bodies

be transformed during the Second Coming?

One day, while he (Saint Symeon) was saying his prayers with a pure heart and conversing with God, he noticed that the air began to illuminate his mind; Although he continued to be in his cell, he began to feel as though he were in an open space somehow. It was dark outside, the night was already at hand, when a radiance suddenly began to glow from up high, just like the morning light at dawn (what a scary vision befell the poor man!) and his living quarters – along with everything in them – vanished completely from sight, making him believe that he was not inside any room.

He was absolutely overwhelmed by a divine ecstasy, and was fully aware of that light with his mind, as it approached him. The light grew steadily stronger, and made the air seem even brighter than before, and he felt that his entire self - along with his body – had now gone beyond all worldly things.

But, because that light continued to shine more and more, making it seem like a sun shining at mid-day, he felt as though he were actually standing inside that light, and that his entire being – together with his body – was filled with joy and tears, that were generated by the sweetness of that light’s presence.

He also observed that the same light – in some wondrous kind of way – came in contact with his body, and very, very gradually permeated its members. The surprise brought about by this vision drew him away from the previous state of theory and left him feeling only this exquisite sensation that was happening inside him. He watched as that light slowly penetrated his entire body, his heart and his innermost depths, making all of him like a fire and light.

And just as with his living quarters, so did he now lose every sense of form, of place, of weight and of bodily shape, and his tears ceased to fall. Then he heard a voice from within the light, saying to him : “It has been decided, that in this same manner shall the Saints be transformed, who will be living and will still be here, during the hour of the final trumpet, and thus transformed, they will be taken up to the heavens, just as the Apostle Paul says.”

After remaining in this state for many hours, the blessed Symeon in his secret and incessant praise to the Lord, and fully comprehending the glory that had enfolded him, as well as the eternal bliss that was to be bestowed on the Saints, began to wonder and ask himself: “Will I ever return to the previous condition of my body, or shall I live like this continuously?” No sooner had he made this thought, than he immediately began to feel that he was moving about with his body like a shadow or a spirit. He realized that he had become (as we said, with his body as well) a light without a form; something entirely incorporeal. He continued to feel that he possessed a body, yet without its material dimensions, and more like a spiritual one. In other words, he felt as though he lacked all weight or mass whatsoever, and was amazed, how he could have a body and yet seem bodiless.

And the light that spoke inside him, said to him once again: “ Thus will all the Saints be enrobed without the flesh after the resurrection, in the future age, with spiritual bodies that are either lighter and finer and more ethereal, or, denser and heavier and more earthen, which will be the determining factor for each one with regard to their stance, their order and their closeness to God.”

After hearing these things, and having seen the inexpressible divine light, the God-sighting and God-possessed Symeon thanked God, Who glorified our species and made it to partake of divinity and His kingdom, and returned once again to his former state, and found himself again inside his cell, in his previous, human condition.

However, he reassured with oaths all those whom he trusted to reveal his secrets, that “for many days after, I could still feel that lightness of body, without feeling any exertion, or hunger, or thirst.”

Given that he partook of these things in the Spirit and was filled with the divine charismas of the Spirit (and of course having fully cleared his mind of all impurities), he was given to see such visions and breathtaking revelations by the Lord, as had the Prophets of old.

Thus, with his apostolic mindset (because his existence was guided and moved by the divine Spirit) he was also given the orator’s charisma, hence whenever words came forth from his mouth –albeit illiterate- he also theologized. With his divinely inspired writings, he teaches the faithful the precision of the pious lifestyle. Having reached spiritual heights such as these, he began to compose ascetic essays, set out in chapters according to the various virtues and the vices that contravened them, by drawing from his own personal ascetic life and the divine knowledge that was bestowed on him, and describing in detail the monastic life for those who practice it, thus becoming to the Israelite nation of monkhood a river of God, full of spiritual waters. 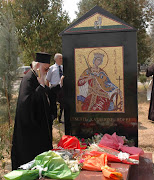